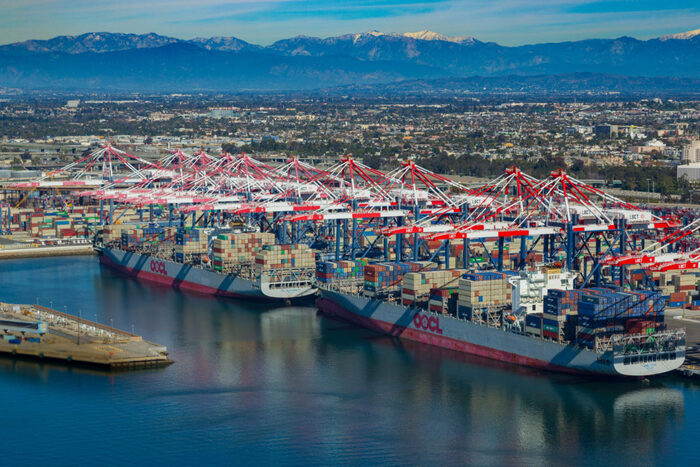 Photo Source :- Port of Long Beach
From snarl to surge, the Port experienced a drop in imports and then a swing to unprecedented volume increases. It appears that pandemic fever generated consumer demand with a fervor best described as “and I want it Now!”. Such was the scene in 2021.The  demand for material goods by Americans, during the pandemic, put a strain on U.S supply chains, compounded by a shortage of truck-chassis vital for transportation of containers to distribution hubs and other land destinations.Despite the negative impacts, the Port Authority handled record cargo volumes in 2021. Equally notable was the 5.7 percent growth in the U.S. economy during the same period.“While orders surged, worker shortages disrupted the supply chain, delaying vessels, containers, chassis and trucks. Confronting historic backups, we still managed to move more containers than ever”, said Executive Director Mario Cordero.

Facing personnel health issues, the work force persevered in their commitment to move cargo to ease the strain on the supply chain. In a collaborative effort, the Port executive team steered the operation to alleviate the year-end backlog of vessels offshore.

In his welcome address at the 2022 State of the Port on February 9, 2022, the Executive Director stated, “Our incredible story became the center of attention across the nation and in many headlines, with 20,000 mentions of the Port of Long Beach in the news media last year alone”.

For the launch of the News Bytes column on this website, we decided it was worthy of additional coverage and a tribute to the Port’s ability to meet the challenges of the supply chain issues.

At year-end the term Supply Chain entered the lexicon of everyday conversation and with it visions of bare store-shelves for the holiday season. The importance and dependency on the free flow of U.S.- trans-Pacific trade had become a reality.

The efficient and a scheduled cargo flow, through a supply chain, has a direct impact on the retail consumer as well as the end-user of parts and components for the manufacturing sector.

To put it in perspective, the Port of Long Beach is a gateway for trans-Pacific trade. As the second-busiest container seaport in the United States, the port handles trade valued at more than $200 billion annually. The enormity of this volume is reflected in the movement of 9.4 million cargo containers in 2021.

The Port of Long Beach recognizes that the supply chain is not so flexible to easily handle historic jumps in cargo volume. The significant increase experienced in 2021 was handled, in part, by fine-tuning port operations to move cargo faster, with round-the-clock action seven-days a week.

“We have witnessed an extraordinary achievement for the entire supply chain – especially so in these extraordinary times”, said Mario Cordero.

The Port continues to advocate for a transformational change, without expanding terminals or building new facilities. With truckers and warehouses possibly joining in tandem with the Port, the framework for a plan has been established with help from the Biden Administration.

A plan that can operate 168 hours a week, 7-days a week, throughout the supply chain. A plan that is in harmony with Asian trading partners. They already work on a 24/7 schedule on the other side of the Pacific Ocean.

“We need to make it a goal as well. It has to be our next great transformation” – Mario Cordero, Port of Long Beach Executive Director.

Manage Cookie Consent
To provide the best experiences, we use technologies like cookies to store and/or access device information. Consenting to these technologies will allow us to process data such as browsing behavior or unique IDs on this site. Not consenting or withdrawing consent, may adversely affect certain features and functions.
Manage options Manage services Manage vendors Read more about these purposes
View preferences
{title} {title} {title}