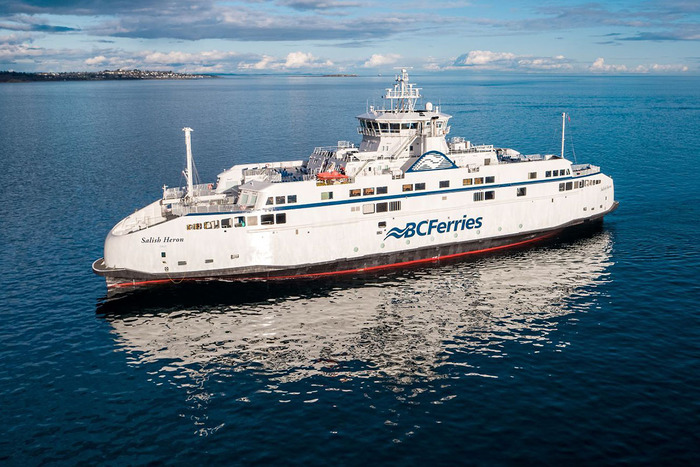 Salish Heron, the fourth ferry ordered by BC Ferries and built at the Remontowa Shipbuilding yard arrived in Canada on March 4. The Salish Class vessels operate on liquefied natural gas, a cleaner fuel than diesel.

The ferry left Gdansk on December 22, 2021. The journey took the ferry across the Atlantic Ocean, over 10,400 nautical miles, through the Panama Canal and along the western Pacific coast of North America to Victoria’s Ogden Point.

The 107-metre Salish Class vessel has the capacity to carry at least 138 vehicles and up to 600 passengers and crew. The ship is powered by three Wartsila engines and electrically propelled by Schottel thrusters at each end, driven by an efficient gas-electric power plant.

The hull design creates a very small wake and the electric propulsion and structural design ensure a quiet ride. The vessel is identical to the three Salish Class ferries which entered service in 2017 and the standardized operations allows for crew and vessels to be interchangeable among routes.

“In our move towards a sustainable future, adopting LNG is one way to reduce our impact on the environment today. This new vessel will be our sixth ship fueled by natural gas.” said Captain Jamie Marshall, Vice President, Shipbuilding & Innovation, BC Ferries.

The double-ended passenger-car ferry, will serve the Southern Gulf Islands in the Canadian province of British Columbia. Onboard amenities include a Coastal Café, Passages retail store, children’s play area and a passenger lounge.

Final preparations, including the exterior graphics on the sides of the ferry, will be carried out at the BC Ferries’ Fleet Maintenance Unit base in Richmond, BC.

The “Salish” class vessel pays tribute to the Coast Salish community’s sailors as the original navigators of these coastal waters. The graphic conception are traditional designs in keeping with the cultural legacy of the region’s indigenous peoples on each of the vessels. The Salish Heron graphics were created by Coast Salish Indian tribe artist Maynard Johnny Junior.

Prior to awarding the contract, BC Ferries issued a Request for Expressions of Interest (RFEOI) for the construction of the vessels to leading shipyards in Canada and around the world in July 2018. The request yielded responses from 16 international shipyards and short-listed three shipyards to proceed to the Request for Proposal (RFP) stage. No Canadian companies submitted a bid.

The agreement with Remontowa is a design-build, fixed-priced contract that provides BC Ferries with substantial guarantees related to delivery dates, performance criteria, cost certainty and quality construction.

Remontowa Holding is the largest shipbuilding capital group in Poland and the leader of the industrial sector in the region, incorporating 25 companies.

Manage Cookie Consent
To provide the best experiences, we use technologies like cookies to store and/or access device information. Consenting to these technologies will allow us to process data such as browsing behavior or unique IDs on this site. Not consenting or withdrawing consent, may adversely affect certain features and functions.
Manage options Manage services Manage vendors Read more about these purposes
View preferences
{title} {title} {title}